Homyachok challenge blog has started a new quilling challenge today!!! The title is Wings of summer - create any quilled project which must include at least one "thing with wings" and at least one flower (if you joined us for "Solo" challenge - use that flower in your work).
Things with wings can be different: butterflies, flies, bees, dragonflies, other winged insects, birds... or anything you can think of that has something to do with summer =)

When I got the task I thought about butterflies - that's obvious, but for me it was too obvious. So I looked for some inspiration on Inna's blog, she loves to quill insects, so I thought I could get some cute idea. But I stumbled upon another great "thing": Quilled Totoro toy! I LOVED the look of that little cute furry and fluffy creature =) Of course he has nothing to do with summer nor with wings =) But it brought an idea of making a nice fluffy 3D bumble bee! =)
So I started making paper fringes... it took ages =)
And finally I came up with this:

Actually when I was making this guy I expected it to become a little cute fluffy bee, but when I finished I had a feeling of Dr. Frankenstein! I made a monster! He's very big (like 4,5 cm / 2"), he weighs 3 g (0,1 oz), he has predatory antennae and scary hairy legs =) He really scares me, but I was courageous enough to touch this monster =)

Next I began arranging the project. Solo flower and the monster-bee. It turned out to be a card:

But it was the way too heavy and had too much dimension for a simple card.

So I made a kind of "home decor":
a flower in a vase with a bumblebee on top:

The flower has a wooden stem which is inserted in a bottle filled with aromatic oils of two green shades. So they not only look nice, but smell great too! =)

So, that were my "wings of summer". Would you like to join us too? 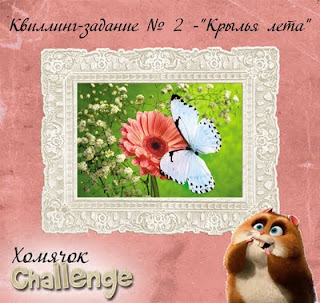 By the way, when I have almost finished my bumble bee and was happy that I "invented" such a thing... I found examples of fluffy bees:
Quilling by ManuK based on tutorial by Lora
Follow the second link to see a detailed tutorial.
Well, my bumblebee was made in a different way - it's bigger and consists of many parts... and probably later I'll post my own tutorial =)
Thanks for looking!!!

P.S.: I made a tutorial for this guy, so there you go:
English tutorial, Русский МК
Author: WhiteRacoon at 10:41 AM

WhiteRacoon
Hi and welcome to my blog! My name is Aljona (you can call me Helen though), I'm from Russia. Married to a wonderful man, am a mom of 2 girls (born in 2011 and 2015), devoting life to my family and crafts of all kinds. I like scrapbooking, cardmaking, quilling, knitting, embroidering, cooking and everything you can think of doing with your own hands. Moved to this blog from - whiteracoon.livejournal.com Hope you like it here, your comments and feedback are always appreciated! And I'm sorry for the lack of attention from me - I don't leave comments often, kids - you know...